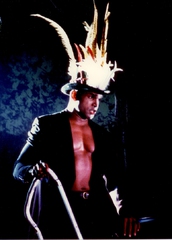 “Brian Green, complete with rubber chickens and steel drums instead of bells, was
an excellent Papageno, playful, tricky and possessing a comic talent that was more
than just a foil to the rather pious libretto. His final scene with a broody
Papagena (Ana Martinez) was especially hilarious.”