Raymond LeGendre BEEN SO LONG, Australia (2000) 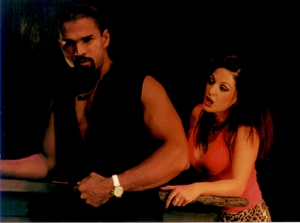 “On what looks to be another terminally quiet night, in stalks Gil (played by Tamblyn Lord),
a would-be psychopath looking to settle an old score with the irresistible Raymond LeGendre
(Brian Green), ex-boxer, arch-seducer, the man who stole away the love of Gil’s miserable
life… Brian Green ripples plenty of bicep in the role of Raymond, a man “fashioned from
black gold and chiselled by thunder”. As well as being built for the part,Green manages
to score some telling points later in the play as the love struck Raymond battles
with the consequences of his carefully constructed lady-killing reputation.”